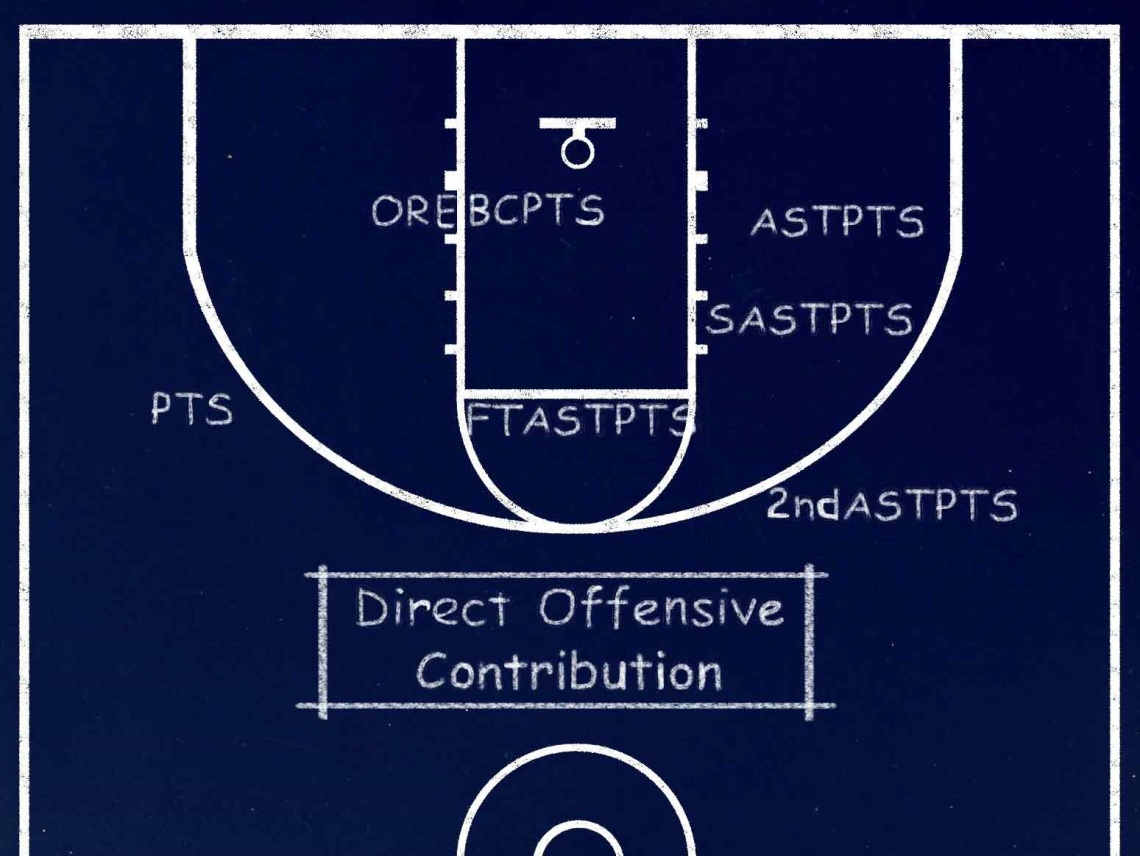 Just like we promised last week, we will now present the 2nd newly developed offensive indicator called Direct Offensive Contribution (DOC). In our last blog post we presented Involvement Rate (INV), an advanced indicator for measuring offensive involvement, in a way similar to usage measures. This time we are expanding measuring involvement to measuring contributions by evaluating how offensive possession events effect player’s direct impact on the offensive end, measured in the number of points created.

Nowadays, journalist often report not only how many points players score and how many assists they dish out on average, but also a total number of points created by a player, scored and assisted. In the 2016/2017 regular season the leader in that aspect was James Harden with 56.2 points – 29.1 scored and 27.1 assisted with an average of 11.2 assists per game (2.42PTS/AST). These statistics should in our opinion be considered as a very good measure of offensive contributions, yet we believe there is still room for its improvement by adding other offensive possessions events to the formula and estimating their individual PTS creation. Again, we believe that this statistics would narrow the gap between guards and especially centers who on average do much less passing and take significantly less shots, however they are involved in more hustle plays – they set screens, create points of Screen Assists, and extend offensive possessions with offensive rebounding.

The Direct Offensive Contribution (DOC) formula in the end looks like this:

Direct Offensive Contribution is an absolute indicator, not a relative indicator and is not depended on the number of possessions a player spends on the floor.

Now we will show Direct Offensive Contribution statistics for the same 10 NBA players, all of them qualified in 2016/2017 (condition 500+ minutes played in the whole season, n=355), selected at different levels of involvement on offense for our previous blog post analysis.

Russell Westbrook again stands out with his Direct Offensive Contribution value, trailing only James Harden in the whole league this regular season. We can see that there is some relationship between INV Rate and DOC – players with lower levels of INV Rate (see our previous blog post) also have lower DOC values and vice versa. But since Direct Offensive Contribution is an absolute measure, while Involvement Rate being a relative measure, the variables are slightly less correlated than one would expect (Spearman’s correlation coefficient 0.75 for all 355 qualified players). 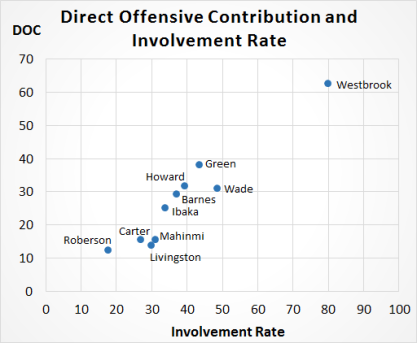 The scatter plot in a way tells the same story. We can see that Dwyane Wade stands out as a player with quite high Involvement rate value (9th decile), but his contribution value is lower (approx. 8th decile) than e.g Green’s or Howard’s, which could also be attributed to his limited playing time at this time of his career (less than 30 min per game). Draymond on the other hand seems to be the most effective player of this group – he makes the most out of limited involvement on offense playing next to three offensively oriented All-Stars.

In the next post we will present the last of our newly developed statistics: Direct Offensive Efficiency (DOE), estimated from an adjusted version of Involvement Rate and the measure presented today, Direct Offensive Contribution (DOC). Stay tuned!