It is safe to say that years from now, the 2016/2017 NBA season will be remembered as the “triple-double” season. Not only because of Russell Westbrook averaging a triple-double for the season and beating Oscar Robertson’s triple-double record from 1961/1962, but also because of a total of 117 triple-doubles, recorded by 23 different players of 19 different NBA teams. Although that the previous 2015/2016 NBA season was outstanding in those terms with 75 triple-doubles, this season NBA players were even able to top that. Easily! And Russell Westbrook was most definitely not the only notable contributor. 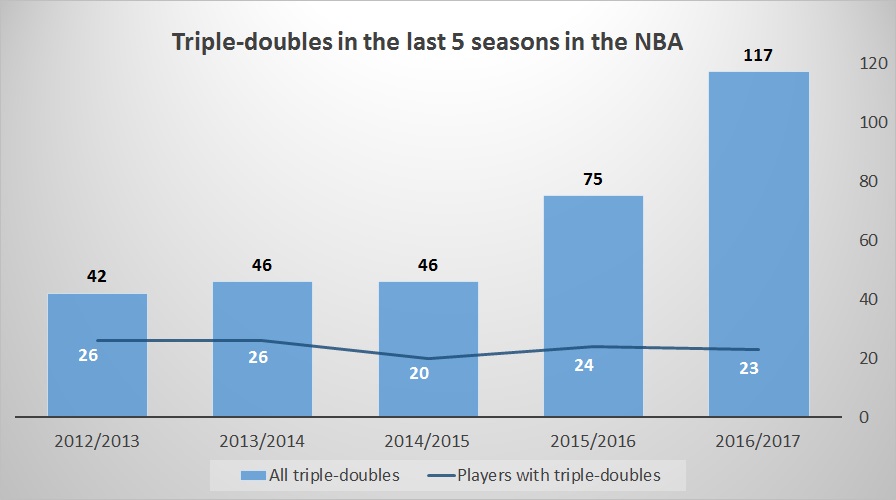 Because of the Westbrook phenomena and out of pure curiosity, we tried to estimate the probability of Russell beating the Robertson’s record of 41 triple-doubles approximately one month before the end of the regular season, as we mentioned in our first blog post. It seemed very unlikely to us that, despite of his astonishing 32 triple-doubles by then, he could have recorded 10 more in just 16 games. That is why we simulated data using his game logs stats from the first 66 games of the season. The results supported our skepticism – we figured out that the estimated probability of Westbrook recording 10 triple-doubles in 16 games was approximately 4%. But we also noticed that 32 triple-doubles in 66 games had been quite an overachievement. With those kind of descriptive game log stats and with assumed random normal distributions of key variables, he should have recorded approximately 25 triple-doubles in 66 games, 7 less than in reality. However, if he had intentionally (and successfully) chased the last two points, the last rebound or the last assist of the triple-double, the estimated number of triple-doubles would have increased to 34.

After the end of the regular season we are in an even better position to make accurate estimates, since we have access to the complete season 2016/2017 game logs stats. That is why we can ask ourselves the following (research) question – was Russell Westbrook chasing triple-doubles and Oscar Robertson’s record, although he publicly denied it? What about other versatile NBA players, do they chase those individual achievements as well?

To answer those questions we decided to simulate full season game logs for five players with the most triple-doubles in the 2016/2017 season: Russell Westbrook, James Harden, LeBron James, Nikola Jokic and Draymond Green. The whole idea of this testing is to establish how many triple-doubles can be attributed to randomness and how many to human factors. Let’s give a very simple example first. Let’s say that there is a player with season averages of 30 points, 10 rebounds and 10 assists. And let’s assume that he is a consistent scorer, the variability of points per game variable is small, and he should score at least 10 points every single game of the season. With an average of exactly 10 rebounds and 10 assists per game (mean and median) and with assumption of normality of uncorrelated variables rebounds per game and assists per game, the probability of that player collecting 10 rebounds or more would be 50%, and the same probability should be assumed for 10+ assists. Consequently the joint probability for all three variables having values 10 or higher is: 1.0*0.5*0.5 = 0.25. In 80 games that player would then record 20 triple-doubles by random. If he recorded 35 triple-doubles, the additional 15 would have to be attributed to human factor, e.g. purposely collecting rebounds and dishing out assists.

Data simulations could be used to answer a particular research question while using real-life descriptive statistics, namely averages and variability measures (in our case players’ regular season stats). However, since variables points, assists and rebounds were not perfectly normally distributed for those 5 players, but rather skewed for different reasons (e.g. overtimes, poor defenses of tanking teams, minor injuries, franchise players sitting in fourth quarters of blowouts), we decided to calculate the following variables instead: points per minute, rebounds per minute and assists per minute. And then multiplying them with simulated minutes data to get points, assists and rebounds variables. Later we simulated all those statistics for 10,000 seasons with between 74 (LeBron James) and 81 (Russell Westbrook) games. At the end we counted triple-doubles in the simulated seasons and calculated descriptive statistics, presented in the table below.

The results show that Russell Westbrook’s record breaking triple-double number does not fall within the estimated confidence interval with 95% probability (95% CI, mean ± 1.96 SD), i.e. between 21.1 and 37.8 triple-doubles in 81 games. The estimated probability of him randomly recording 42 or more triple-doubles was only 0.2%. So the odds against were 499 to 1. On the other hand, for the other four studied players, their regular season triple-double numbers do fall within the calculated confidence intervals. The mean estimates are actually pretty close to the real season numbers, especially in the case of LeBron James (12.7 vs 13) and Draymond Green (4.2 vs 5). Nikola Jokic on the other hand recorded a relatively high number of triple-doubles for his scoring, rebounding and passing stats (less than 10% chance for 6+ of them in 73 games), however he recorded all of his triple-doubles in the second half of the season, during which his role and numbers increased significantly (18.7 PTS, 11.4 REB, 6.0 AST).

To sum up, the results of our analysis show that it is highly unlikely to record 42 triple-doubles in 81 games by random with season averages of 31.6 PTS, 10.7 REB and 10.4 AST and “normal” variance. We assume that there should also be human factor in the forms of chasing the last (two) rebound(s) or the last (two) assist(s), playing the last minutes of blowouts, or even the whole team supporting you chasing records. Our results go hand in hand with Justin Kubatko’s estimations, however we were lucky to work with complete regular season statistics. Our simulation could obviously be improved, other factors taken into account (e.g. steals and blocks), and certain relations between variables simulated as well. However, the results would most probably be very similar and the answer to our question, who was chasing triple-doubles in the 2016/2017 NBA season, would remain the same: most probably only Russell Westbrook.