Mark Twain once said that “The secret to getting ahead is getting started”, so this blog post should serve as the first cornerstone of, hopefully, an interesting and fun blog which will attract basketball enthusiasts with a thing for basketball stats. 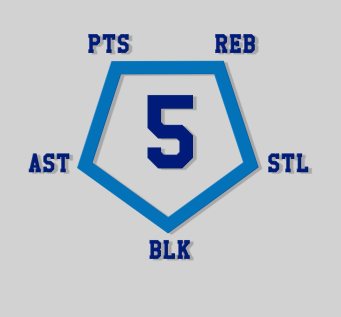 Some of you might wonder why FiveTimesFive, what exactly does it mean? Most of you are probably more familiar with “5×5 stat line” or “5×5 game” terms, which mean that a basketball player records at least a 5 in each of the 5 statistical categories: points, rebounds, assists, steals and blocks. Since there was only one player in the 2016/2017 season with a 5×5 game (Draymond Green) and only a couple more in the previous 10 seasons, this achievement is very rare, quite unique, and displays incredible versatility. And we would like this FiveTimesFive blog to be known for those characteristics as well.

Basketball statistics, especially NBA stats, have become increasingly popular in the last 5-10 years. Every game a significant amount of play-by-play data is collected, aggregated and reported in a form of interesting facts and stats. The data are later used for computation and derivation of different statistical indexes, which help users to make comparisons between players and teams to focus on certain aspects of the game to become more competitive. Since most NBA stats are publicly available, they represent a very rich data source for statistical analysis and dissemination of interesting findings.

FiveTimesFive team members have always had a thing for basketball statistics. Despite of not sharing our findings with “the World”, we occasionally found ourselves calculating stats, making advanced comparisons, even simulating data to forecast outcomes. For example, comparing overall contributions of Nikola Vucevic (Orlando Magic) to overall contribution of Dwight Howard (LA Lakers, Houston Rockets) in the first 4 years after the blockbuster trade in the 2012 offseason. Or simulating data using Russell Westbrook’s game logs stats one month before the end of this season to estimate the probabilities of him beating Oscar Robertson’s triple-double record. And now we have decided that it is time to share these findings with you, to add value to the existing NBA stats, and to try to show basketball fans that even advanced statistics can be much fun. And we believe that today, on the first day of the 2017 Playoffs after one of the most entertaining regular seasons in the history of the NBA, it is the right time.

In addition to providing our readers with entertaining results of either simple descriptive or “deeper” multilevel statistical analysis, we will also share most of our data and statistical software code (R, Stata, and SPSS) on GitHub. By doing that, all interested data users will be able to replicate results or even add value to our statistical analysis by extending our findings. In the 21st century, open data, open access and open science are concepts of great importance, therefore they should in our opinion be applied in basketball statistics community as well.

We hope you will enjoy reading our blog! We will welcome all of your questions, comments and suggestions, and be happy to engage in interesting discussions. To go even deeper into NBA stats… together!